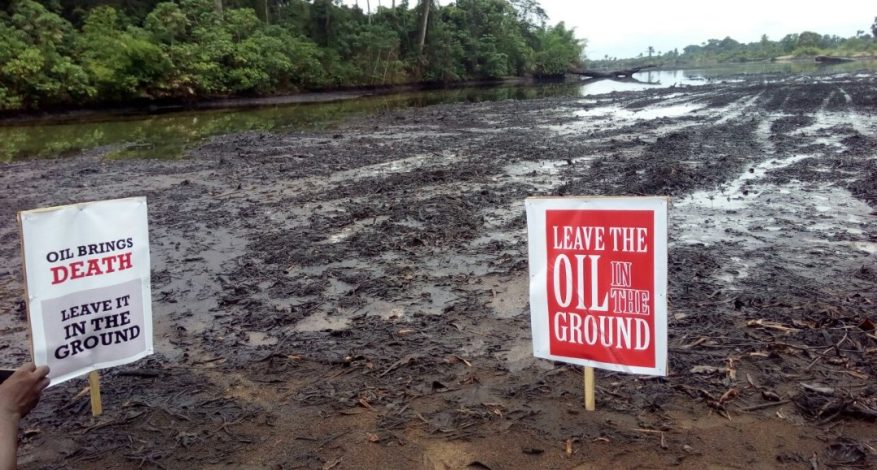 Cut and run – Pollute, don’t pay. Big Oil has perfected its playbook in the Niger Delta and is now looking to walk away.

The two largest transnational oil companies operating in Nigeria’s Niger Delta, Shell and ExxonMobil, are packing up and leaving.

Both companies have announced separate plans to sell off their assets as soon as they find buyers and to leave the Niger Delta, where they have extracted crude oil and gas for over half a century. For communities living in the region, the news is cause for bewilderment and uncertainty – the fear that after the devastating impacts of oil extraction they have suffered, their quest for ecological justice may never be realized.

The Niger Delta region consists of nine states in Nigeria, bordered to the south by the Atlantic Ocean and to the east by Cameroon. It occupies 112,000 square kilometres, roughly 12 per cent of Nigeria. Over 40 ethnic groups and nationalities speaking hundreds of languages and dialects are indigenous to the region.

Crude oil has been extracted in commercial quantities from the Niger Delta since 1956, expanding from a few viable oil wells to over 900 active wells today. Together with thousands of other oil facilities, these have turned the Delta into one massive oil and gas field, producing up to 2.5 million barrels of crude oil every day.1

The oil and gas produced from the region has been responsible for a big chunk of Nigeria’s income for several decades, driving an oil dependency that has exposed its economy to intense volatilities. As of 2019, oil and gas made up 84 per cent of government export earnings.2

However, the reality for the people who ‘host’ oil activities is far from rosy. Despite the massive hydrocarbon profits, living conditions in areas where extraction takes place are unbelievably horrible.

The over 30 million people who live here have not benefitted in any significant way from the resources pumped from beneath their lands, rivers and swamps. Poor healthcare and education, insecurity and poverty are widespread. Mismanagement, corruption and elite capture of wealth and resources with oil company complicity has made these communities among the least developed and most impoverished in the country.3

The larger Nigerian nation has also not made any progress using its oil wealth. Instead, it has overtaken India as the world’s poverty capital – with 94 million Nigerians living in extreme poverty.4 Again, the narrative for the Niger Delta is worse still – oil extraction makes traditional sources of livelihood unproductive without providing any alternatives, while also compromising health.

Thousands of kilometres of crude oil pipes are buried beneath the land, swamps and rivers of the Niger Delta, sometimes right in people’s farmlands and backyards. They regularly rupture, releasing oil that contaminates farms and rivers, leaving a trail of ecosystem destruction.

It is estimated that more than 2 billion litres of crude oil have been spilt in the Niger Delta over the last 50 years.5 According to the National Oil Spill Detection and Response Agency, there were ‘around 370 publicly available oil spill records in 2020’ alone.6 More are never reported officially.

The effects of spills are immediate and devastating. Even small-scale spillage in a river can cause mass fish die-off, pushing thousands of fisherfolk towards starvation and destitution. Mangroves, which are the breeding ground of fish and other aquatic species, wither and perish. Rivers become lifeless. Similar livelihood losses occur on farmland, too.

Each year companies flare $2.5 billion worth of gas – creating more emissions than the transport and electricity usage of all Nigerians

Then there is the flaring, which causes heart and respiratory illnesses. Each year companies burn off $2.5 billion worth of gas, produced as a byproduct of oil extraction, in this manner – creating more emissions than the transport and electricity usage of all 206 million Nigerians.7 Alternative ways of managing this gas are available but the oil companies find wasteful flaring cheaper and more convenient. Deadlines to end flaring have been repeatedly put back – from 1979 to 2030.

In 2011, the United Nations Environment Programme (UNEP) released an assessment report of polluted sites in Ogoniland, the oil-rich territory of the Delta’s Ogoni people, from whose lands and rivers Shell extracted 28,000 barrels of crude oil daily between 1958 and 1992. It detailed the ravages of oil pollution, contaminating water sources and exposing communities to severe health risks.

UNEP estimated the clean-up of Ogoniland alone would take 25-30 years and an initial investment of $1 billion. The report exposed the repeated failures of oil companies to clean up spills – sites supposedly remediated by Shell were found to still be heavily contaminated.8 Meanwhile a Nigerian study found cleaning up the entire Niger Delta region would cost more than $50 billion and take at least 50 years.9 Life expectancy in the Delta has fallen to under 43 years.10

It’s no wonder that affected communities take a dim view of the new wave of oil company ‘divestment’, seeing it as an opportunity for the companies to cut and run after years of environmental pollution in the Niger Delta.

Shell’s chief executive officer, Ben van Beurden, claims the company cannot ‘solve community problems in the Niger Delta’ and that it has concluded that ‘this is an exposure that doesn’t fit with our risk appetite any more’.

Indeed, the last decade has seen a resurgence of community resilience and environmental justice campaigns fuelled by recently discovered opportunities for holding transnational companies to account in European courts. The ‘exposure’ Shell is suddenly shy about is exposure to accountability for rights abuses and ecological destruction.

As Shell and ExxonMobil sell off their assets to local players, there are uncertainties about who exactly will be responsible for assessing the enormous damage caused by pollution and cleaning up the mess. When Shell talks of making a ‘clean break’ from Niger Delta assets, the possibility of accountability becomes ever more remote.

Tijah Bolton, who works with communities heavily impacted by the activities of ExxonMobil in Akwa Ibom state, says divestment is ‘an attempt to abdicate responsibility… After over 50 years of extracting oil, you just sneak away without informing your host.’

In 2021, the state-owned Nigerian National Petroleum Corporation, which has joint ventures with most oil majors, committed to developing a divestment policy to safeguard the country’s interests. This has yet to materialize and the time before transnationals leave is running out.

When affected communities have tried to hold transnational companies to account, they have rarely received the support of the Nigerian government. From the outset, the business of oil extraction in Nigeria operated along the patterns of commerce established by Western traders and colonial powers – as a deadly mix of corporate profiteering facilitated by state-backed repression.

In 1990, the people of Umuechem, a community just north of Port Harcourt, the Delta’s largest city, went on a peaceful march to demand that Shell deliver on promised benefits. When the company had arrived in the community 32 years earlier, they had pledged roads, hospitals, schools, electricity and job opportunities. Instead, the farming and fishing community was exposed to pollution, land grabs and loss of livelihoods.

Peaceful protest felt like the only option left as they gathered at a crossroads several kilometres away from any Shell facility, where they sang and danced. In response to the affront, Shell called in tactical units of the Nigerian police who burnt several buildings and shot indiscriminately, killing 80 people according to Amnesty International.13 To this day no-one has been held accountable.

Better known is the case of Ogoniland, where protests against Shell triggered a prolonged siege by the Nigerian army, during which several community members were murdered, raped, beaten, detained and exiled.14

The leaders of the Movement for the Survival of the Ogoni People, including writer Ken Saro-Wiwa, were executed in 1995 after a stage-managed trial. Shell had repeatedly raised the Ogoni ‘problem’ with then-dictator General Sani Abacha, as recorded by Amnesty and others.15

Resistance has stopped all extraction by Shell in Ogoniland since 1993, although new spills from pipelines that criss-cross the territory continue.

In other communities where the people have attempted to hold the transnationals to account, the repression has followed a similar pattern. Seeking redress from Nigerian courts has not always been an option – they are firmly in the grip of the government and the chances of communities getting positive outcomes are slim.

One rare exception came in 2005 when a court declared in favour of the Iwerekhan community that flaring violated constitutional rights to life and dignity, including to a ‘clean, poison-free, pollution-free, healthy environment’.7 Alas, by the time the court met to determine whether Shell had complied with the order for an immediate halt, the presiding judge had been moved elsewhere, and the court file could not be traced. Gas flaring continues in Iwerekhan to this day.

Kentebe Ebiaridor, who works with the NGO Environmental Rights Action, believes it is the failure of the Nigerian courts to provide justice that led locals to arm themselves and resist the oil companies in the late 1990s.

‘How do you take a people’s resource, destroy their fish ponds, their farmlands and turn their children into beggars, and when they demand justice, you invite the police and army to kill them?’ he asks.

With each flood fishers and farmers are forced to survive without income for months, engendering a new wave of poverty, insecurity and forced migration

Many oil-producing areas lie along coastal plains, in close proximity to the Atlantic Ocean and other water bodies, and communities located there are experiencing regular floods as a result of climate change.

In 2012, many community lands including entire villages were submerged under two metres of water, an entire farming season was lost and countless people were forced to migrate to higher grounds. Since then, the floods have come regularly. Each time community members, predominantly fishers and farmers, are forced to survive without income for months, engendering a new wave of poverty, insecurity and forced migration.

Many of these people are yet to come to terms with the fact that the oil and gas extracted from their lands is responsible for the climate change impacts that now threaten their existence.

For the ecologically devastated communities of the Niger Delta, no hurried divestment by transnational oil companies will be tolerated without restoration of their environment and livelihoods.

For them, the definition of just transition has to include repairing the damage occasioned by oil pollution, an audit of the health of the people and a plan to respond to the threats posed by climate change. A just transition must also provide justice for the countless victims of oil company-inspired and state-sanctioned abuses, and reparations to the people of the Niger Delta for decades of expropriation. Anything short of these is injustice.

KEN HENSHAW works at the Niger Delta organization We the People, supporting communities whose lives have been devastated by crude oil extraction, and who are facing new climate change challenges, to demand ecological justice.