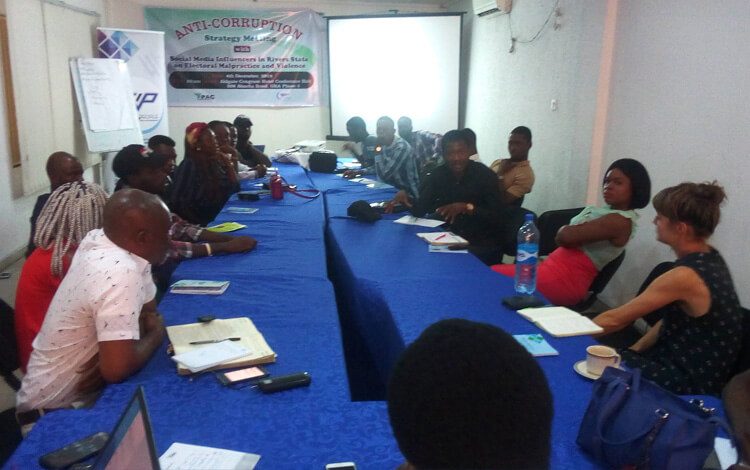 On the 4th of December 2018, We the People hosted a Strategic Workshop engagement with some of the most vocal and well known Social Media influencers and bloggers in Rivers state. The engagement was held in recognition of the fact that Social Media plays a key role in fueling electoral violence and other malpractices. The strategic engagement aimed at bringing key influencers together to take actions to counter fake news and election related violence.

At the meeting, the Social Media influencers committed to a set of actions that will counter the corrupting of the electoral space and will mitigate the descent of elections in the state to violence as it was in 2015.

Specifically, the workshop arrived at the following commitments;

1. All social media influencers agreed to create and join a common platform where discussions aimed at sanitizing the electoral space from corruption will be held.

2. All influencers will deliberately fact check all election and politics related posts to ensure they are factual. Every post will be weighted for its effect on the populace before they are blogged.
3. All influencers committed to create and promote contents that encourage anti-corruption and non-violence as well as educate people ahead of the 2019 elections.

4. All social media influencers committed to calling out any blogger that promotes hate, falsehood, corruption and violence ahead of the 2019 elections.
5. A Charter of best practices and commitment of online influencers will be developed and shared for endorsement by all influencers ahead of the elections.
6. The influencers resolved to write to sites such as Facebook informing them of the volatile nature of Nigeria’s elections and the need to monitor online hate speech, falsehood and violence.
7. The influencers resolved to initiate an ‘automatic take down’ that consistently remove posts that promote election malpractices and hate speech.