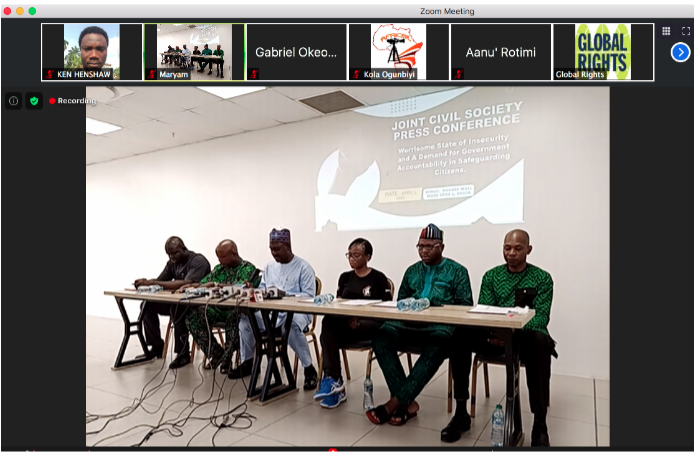 Nigerian Lives Matter: A Call to the Federal Government of Nigeria to Fulfil its Primary Constitutional Responsibility of Securing the Nation

We, as civil society organisations and citizen groups across Nigeria note with concern
the worsening state of insecurity in Nigeria. We, therefore, call on the government to
take urgent steps to fulfil its constitutional responsibility of protecting lives and property
as enunciated in Section 14 (2) (b) and Section 33 of the 1999 Constitution of Nigeria
(as amended); and in fulfilment of its obligation under Article 3 of the Universal
Declaration on Human Rights and Article 4 of the African Charter on Human and
Peoples’ Rights.

This call has become necessary in the face of escalating attacks and wanton killing of
thousands of Nigerians in different parts of the country.  Most recently, in the past
month being the bombing of the Abuja-Kaduna train and the Gidan train station; the
brazen attack on the Kaduna airport, the take-over of the Kaduna-Abuja Expressway
Road by terrorist groups; the siege on nine communities in Giwa Local Government
Area Kaduna state which resulted in the loss of over 100 lives, with an unspecified
number of persons abducted from their homes during that invasion; the increased
attacks in South-East Nigeria, in particular, Imo state; the attack on Nnewi South LGA of
Anambra state and the burning of the LGA secretariat; the escalation of gang wars in
Lagos and Ogun state; the killing of over 65 persons in Kebbi state; the attack on Kwali
Area Council of the FCT and the abduction of a traditional ruler. The list appears
endless.

All of these signal a total collapse of the country’s security architecture.  The apparent
nonchalance by the government evidenced by its unending fruitless statements raises
concerns about its commitment to ending this siege that continually compromises our
individual and collective security as Nigerians. We are appalled to note that despite the
continued assurance by the Presidency and the nation’s Security Chiefs that the country

had technically defeated terrorists, and that the nation had become considerably safer,
our experiential reality as shown in the few examples shared above tells a different
story.  Nigerians are increasingly living in constant fear and are apprehensive of
becoming victims of mass atrocities both in public and private spaces.  They can no
longer sleep at home in peace or travel without fear of being abducted or killed. Parents
are choosing to keep their children away from schools for fear of them being abducted.
No one feels safe.

While we commend the National Assembly for its proactive steps to summon the heads
of security agencies who are directly saddled with the responsibility of securing
Nigerians, we note their timidity in assertively demanding that the Presidency and
service chief be accountable. We strongly condemn the failure of the service chiefs to
honour the invitation by the National Assembly as it underscores their lack of
accountability to the People that they have sworn to protect, and the level of priority they
attach to their duty of securing our lives as Nigerians. We, therefore, urge The National
Assembly to be bolder in its oversight function and demand accountability of the
Executive and its agents.

We note the associated violence and mass atrocities that have over the years
characterised Nigeria’s electioneering process on the altar of politicians’ ambitions.
Particularly, in the year running up to the general elections and therefore warn our
politicians to desist from combusting our already flammable polity.

We note with a sense of deep sadness, the government’s failure to gauge the mood of
the nation, when right after the Abuja-Kaduna train bombing, it focused its energy on
mobilizing supporters for the World Cup Qualifying match, shutting down government
offices by 1pm on the day of the match and providing free buses to supporters with
great fanfare. Worse still, failing to honour our recently departed compatriots by a
simple act of mandating players and officials to wear black armbands in their honour.

While we appreciate the media’s constraints in the face of continued repression of press
freedoms by the government, and the financial constraints of conducting detailed
investigations, we remind them that as the 4th realm of government, they owe Nigerians
a duty of timely truth, of demanding accountability of duty bearers and amplifying citizen
voices and healthy debates on the building and preservation of our nationhood.
Given the foregoing, we call on the government to take urgent and deliberate action to:
 Live up to its constitutional duty of ensuring the security and welfare of all
Nigerians;
 Review the nation’s security architecture and be more proactive in building the
capacity of intelligence agencies;
 To be humane in its actions as mandated by Section 17(2)(c) of our constitution;
 Account for the abducted, the missing, and the dead in the Abuja-Kaduna train
bombing;
 Take immediate action to rescue all abducted persons;
 Conduct an independent inquiry into the immediate and remote circumstances
that enabled the successful bombing of the train; and in particular, to investigate
the claim by the Minister of Transportation, Hon. Chibuike Rotimi Amaechi to the
effect that some persons frustrated his efforts towards providing critical
surveillance infrastructure for the rail track with a view to identifying the people
that are deliberately sabotaging government efforts; as well as
 Take deliberate action through responsible leadership in addressing the
immediate and remote circumstances that are festering terrorism and other forms
of mass atrocities across the country.

Finally, we call on all Nigerians to remain vigilant, there’s no better time than now for us
all to unite in demanding accountability from the government. It is apparent that we are
in a state of active warfare, and that this war is against ‘we the people of Nigeria’:
young, old, southern, Eastern, Western and Northern. Therefore, we must all rise to
contend for the soul of our country from the hands of insurgents and political
miscreants. We must all take particular care to refrain from misinformation that will

escalate insecurity, and be bold in our call to collectively demand accountability from the
government, knowing that no one is safe till everyone is safe.
God bless Nigeria
Signed: