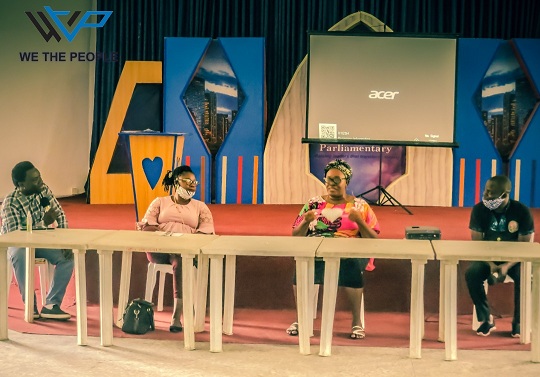 In Calabar the capital of Cross River state, southern Nigeria, hundreds of children, some as young as 6 live on the streets. These kids are exposed to the most horrendous conditions of existence, conditions that can only be described as atrocious. To survive each day, they depend only on what they can scavenge from refuse dumps, leftovers at restaurants, what they can steal and the occasional goodwill of a few individuals and organizations.

They are condescendingly called ‘Skolombo’ while the girls are sneeringly referred to as ‘Lacasera girls’. In reality, these are kids whom our society- with its laws, institutions, cultures and religion- have left behind. They have been hardened by suffering, abuses and narcotics to loath the society that has failed them and left them no future.

On the 30th of June 2020, We the People brought together a wider range of stakeholders including public officials, civil society actors, community leaders and the media to have a frank conversation on the increasing problem of children on the streets of Calabar. The Street Child Summit hosted by We the People also provided opportunity to share and validate findings of a research into the origins and drivers of the problem.

Findings from We the People’s research indicate that the inability of the Cross River state government to implement its own Child Rights Law is the single most important reason that the street child phenomenon continues and escalates. Similarly, there is a mood of inertia surrounding street children in Calabar. Many persons and institution with the capacity to address the issue, are lethargic towards it. In a bizarre irony, the victims are blamed for the abuses they suffer and the fact that the society has failed to protect them. They are regarded as vermin, parasites and pollutants of social good that need to be eliminated, not helped or supported. Exposed in this manner, they have become victims of criminals who specialize in converting them to a life of violence and crime.

The research also reveals that the majority of kids end up on the streets on account of witchcraft branding, where children are declared witches and wizards by their families and religious leaders and thrown out of homes.

Participants at the Summit expressed concerns over the fact that governments at all level have failed to address the problem of street children in any reasonable way, rather pretending it doesn’t exist.

The response of the government to the phenomenon of street children has mostly been punitive, responding to the manifestations of the phenomenon rather than the sources and drivers. Unfortunately,  these approaches do not take into consideration the deeper and more far reaching issues including how the kids got on the street in the first place, and what needs to be done to reverse the trend.

We the People is currently engaged in a series of interventions to end the phenomenon of street children in Calabar.