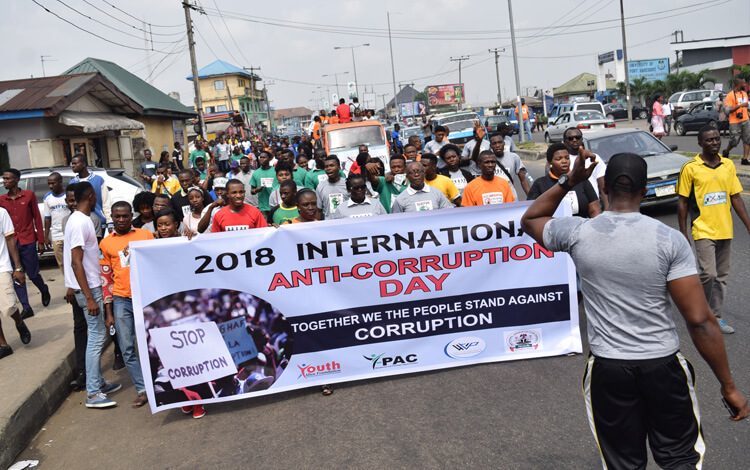 A part of activities to mark the 2018 International Anti-Corruption Day, We the People held a rally on the 8th of December 2018 in Port Harcourt. The event which had in attendance hundreds of students, civil society actors, media, transporters and other professional bodies, was organized in collaboration with the National Orientation Agency.The event aimed to sensitize Nigerians on the need to resist and criminalize corruption as well as pressure governments at federal, state and local levels to show increased commitments to the fight against corruption. The Rally also provided opportunity for the distribution of flyers and posters with details of where corruption cases can be reported and how citizens can contribute to the fight against Corruption.
Addressing the Rally, The State Director of NOA, urged Nigerians to be committed in the fight against corruption which he said, is the tap root from which other vices and criminal activities grow. He reiterated the fact that citizens have an important role to play in curbing corruption through resisting it and reporting it.

In his speech, Executive Director of We the People, Ken Henshaw described corruption as a plague which had eaten deep into every facet of the country and threatened to destroy it from inside out. “We have seen our country drop steadily on all development indicators, we have now become the poverty capital of the world, we have the highest out of school children number in the whole world, we have one of the worst supplies of electricity in the world, life expectancy in our country is alarmingly low. These are all manifestations of one problem; corruption. The resources that should develop our country ends in the packets of a few persons. We need to fight corruption, it is the only way our country can make progress” he said.

It will be recalled that earlier this year, data released by Transparency International in its Corruption Perception Index indicated that the corruption problem in the country may have become worse with the Nigeria scoring less than it did in 2016. Nigeria currently ranks 148 out of 180 countries.