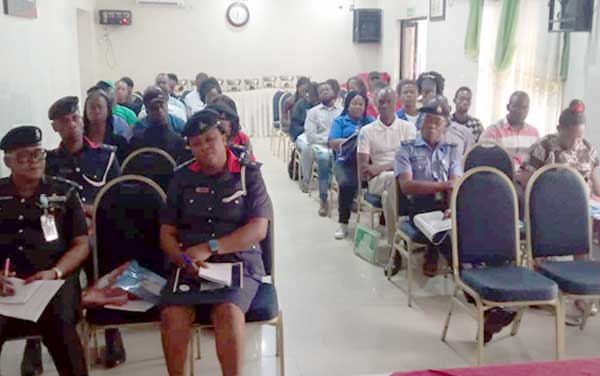 In the last decade, there has been a tremendous increase in the number of street children in Calabar. These kids are exposed to the most horrendous conditions of existence, conditions that can only be described as atrocious. To survive each day, they depend only on what they can scavenge from refuse dumps, leftovers at restaurants, what they can steal and the occasional goodwill of a few conscientious individuals and organizations.

They are condescendingly called Skolombo and the girls are sneeringly referred to as ‘Lacasera girls’. In reality, these are kids whom our society- with its laws, institutions, cultures and religion- have left behind. They have been hardened by suffering, abuses and narcotics to loath the society that has failed them and left them no future.

Concerned by the increasing dilemma of street children in Calabar the Cross River state capital, We the People on the 30th of July 2019, held a multi stakeholder Town Hall Meeting to call attention to the problem and also present a research report on one of the drivers and impact of the phenomenon: child prostitution.

We the People’s report indicates that there is an alarming network of child prostitution in the state, with girls as young as 9 years being sexually exploited by adult males. The meeting aimed specifically at mobilizing stakeholders to develop a joint approach to solving the problem.

The meeting brought together stakeholders including the National Agency for the Prohibition of Trafficking in Persons (NAPTIP), the Nigeria Police Force, NSCDC, the DSS, Civil Society Organizations, community leaders and the media.

It is my honour and pleasure to welcome you to this important Town Hall Meeting aimed at better understanding the problem of street children generally, but the occurrence of prostitution among street children specifically. If you work in the field of child rights or you live in the city of Calabar, you will agree with me that this has been an alarming problem that requires immediate attention by all groups; government and private.

In the last decade, there has been a tremendous increase in the number of street children in Calabar. These kids are exposed to the most horrendous conditions of existence, conditions that can only be described as atrocious. To survive each day, they depend only on what they can scavenge from refuse dumps, leftovers at restaurants, what they can steal and the occasional goodwill of a few conscientious individuals and organizations.

They are condescendingly called Skolombo and the girls are sneeringly referred to as ‘Lacasera girls’. In reality, these are kids whom our society- with its laws, institutions, cultures and religion- has left behind. They have been hardened by suffering, abuses and narcotics to loath the society that has failed them and left them no future.

The report we present you with today is the outcome of a research by We the People. In early 2019, we became concerned like most other organizations with this problem. We set out to better understand the dynamics and drivers of the street child problem especially as it manifests in the cruel phenomenon of child prostitution in Calabar. We also aimed at understanding how something so vicious against children could happen so openly despite the laws, religious and cultural traditions that forbid it. For the avoidance of doubt, child prostitution in Calabar is not a hidden phenomenon. It happens openly in the full glare of responsible members of society, it happens with the knowledge and perhaps complicity of law enforcement, it happens with the knowledge of the state and local governments despite the many laws put in place to check it.

Ladies and Gentlemen, to be clear, there are conventions and laws at the international, national and state levels well-crafted and articulated to protect children against abuses and sexual exploitation.

In 2003, Nigeria enacted the Child Rights Act, essentially drawing from the provisions of the Convention on the Rights of the Child and the African Charter on the Rights and Welfare of the Child. The Nigeria Child Rights Act integrates existing legislations on the rights and responsibilities of children, as well as those stipulating the duties and obligations of government, parents and other agencies in that regard.

To make the Child Right Act effective in Cross River State, the state House of Assembly in 2009 passed its version of the child protection framework called a ‘A Law to Protect the Rights of a Child and for other Related Matters, 2009’, largely ‘domesticating’ the provisions of the Nigeria Child Rights Act.

The Cross River State Child Rights Law prioritizes the best interest of the child as the paramount consideration in all actions. To realize this, it states;

More specifically, the Law provides important protections for the child, especially within the context of the street child phenomenon in Cross River state. Part II Subsection 11 provides for the dignity of person of the child. It expressly prohibits the subjection of the child to physical, mental or emotional injury, abuse, neglect or maltreatment, including sexual abuse, torture, inhuman or degrading treatment or punishment.  It goes further to charge the State, parents, guardians, institutions, services, agencies, organizations or bodies responsible for the care of a child to ensure adequate opportunities for the child to enjoy those rights.

Section 31 of the Law prohibits the sale, hire, let, disposal of or obtaining or possession of a child. It goes further to state in detail that a child shall not be used in Cross River state for the purposes of begging alms, guiding beggars, prostitution, domestic or sexual labour. It further prohibits forced or compulsory labour of the child as well as serfdom and debt bondage. It also forbids theuse of kids for hawking of goods or services on main city streets, brothels or highways; and the procurement or offering of a child for prostitution or for the production of pornography.

Section 32 of the Law state that no person, shall have sexual intercourse with a child and further imposes a punishment of life imprisonment on those who do so.

The protection which these frameworks offer for children, as well articulated brave as they are, have turned out to be practically ineffectual at best and non-existent at worse in protecting children. In Cross River state, the degrading conditions children are exposed to remains unchecked and unmitigated irrespective of the policies and laws. Perhaps the most dehumanizing abuses which is least checked and talked about within the child rights spectrum is child prostitution.

Our findings indicate that the inability of the Cross River state government to implement its own Child Rights Law is the single most important reason the street child phenomenon continues and escalates. Similarly, there is a mood of inertia surrounding street children in Calabar, especially as it relates to child prostitution. Many persons and institution with the capacity to champion the cause of addressing this issue, are lethargic towards it. In a bizarre irony, the victims- sometimes children less than 10 years old- are blamed for the abuses they suffer and the fact that their society has failed to protect them. They are regarded as vermin, parasites and pollutants of social good that need to be eliminated, not helped or supported.

Exposed in this manner, they have become victims of a growing mob of pedophiles who routinely abuse children sexually; and a rising cartel of middlemen and women whose enterprise is the sexual exploitation of children.

Ladies and Gentlemen, this Town Hall Meeting today is We the People’s attempt at initiating a conversation aimed at ending this very terrible menace. You will notice in the report we have published that there are no recommendations. This is deliberate. We recognize that to address a problem so atrocious and endemic, we need a robust multi stakeholder approach which takes the capacities and responsibilities of each actor to account. It is our hope that we can have a frank conversation today, and initiate a set of actions that are needed to combat this ill.

Finally, We the People recognizes the contribution and wealth of work done by our partner and friend the Basic Rights Counsel Initiative. Theirs is a pioneering effort in this regard. We also thank the National Agency for the Prohibition of Trafficking in Persons (NAPTIP) who have been outstandingly exemplary in their actions to end the forced prostitution of Children in Calabar.

Children are growing-up on the streets of Calabar without any support from family, society or government; without morals, care or concern and without skills, learning or opportunities.

Their vengeance on society in the future can only be imagined.